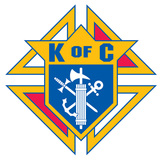 The “Strong Right Arm of the Church,”
The Knights of Columbus is the world’s largest Catholic fraternal service organization.  Founded by Father Michael J. McGivney[1] in New Haven, Connecticut in 1882, it was named after Christopher Columbus.   Father McGivney originally conceived the Knights as a mutual benefit society to help fill the needs of immigrants and families after the death of a breadwinner.  From this origin the Knights grew into a mutual benefit organization dedicated to providing charitable services, promoting Catholic education and Catholic public policy decisions, and actively defending Catholicism in various nations. 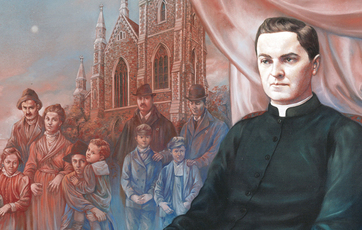 Father Michael McGivney
​​As of 2015 there were 1,883,598 members in nearly 15,000 councils with 302 councils on college campuses.  Membership is limited to practicing Catholic men age 18 or older.  Membership consists of four degrees, each exemplifying a different principle of an order. ​

Father McGivney’s mutual benefit society has grown into one of the most highly rated insurance and financial benefit programs.  At the end of 2015 the Knights surpassed $100 Billion of insurance in force and managed $22 Billion in assets.  In 2015 alone, they distributed $875 Million to members.  And they have 2 Million contracts in force.   Despite the challenging economic climate, The Knights of Columbus has experienced 15 consecutive years of sales growth.  A Knights of Columbus Financial representative can offer members a wide variety of insurance and financial planning products[2].

The Knights of Columbus follow four core principles:  Charity, Unity, Fraternity and Patriotism. Adherence to these principals has resulted in the Knights becoming a formidable force in Christian philanthropy, brotherhood and support of the Catholic Church:​
Council 760 St. Paul, Walnut, Erie.
Knights of Columbus Council 760 is proud to represent the richest Catholic historical heritage in southern Kansas and the four-state region. Council 760 was founded on April 26, 1903, fifty-six years after the Jesuits and Sisters of Loretto founded the Catholic Osage Mission. On the date of our founding, a special train brought a large delegation of brother Knights from Parsons to help institute our council with a program and a Solemn High Mass celebrated by Rev. Father Huber. Three months later a delegation of our Knights passed the favor to Fort Scott by assisting with institution of their Council. Thus the brotherhood of the Knights helped propagate what was still a relatively new organization.

Council 760 members continue to live and promote the mission of Father Michael McGivney. During a typical business year we:Becoming a Knight brings many of the benefits of a financially strong, world-wide fraternal organization. Being a Council 760 Knight includes some more personal benefits—Pride and Personal Satisfaction! Our council is deeply rooted in the oldest Catholic history of our region; and we make important contributions to our church and our area community. As a brotherhood, we enjoy having a good time in our work and social activities. Any young, practicing Catholic man would do well to consider Knighthood. We would love to sign up some of the older men too!
​ 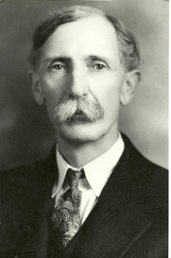 William Whites Graves
Our Most Esteemed Knight.
Along with our Catholic heritage, we are also very proud of a founding Council 760 Knight.   Our first Lecturer, William Whites Graves, distinguished himself, our council and community with a life dedicated to telling the story of the Catholic Church in our region.

​Born in Kentucky, Graves’ parents moved to Osage Mission in 1881 when William was nine years old.  The things he witnessed and the people he met here during the next 10-15 years left a defining impression on  his life.  He met and worked for some of the original Osage Mission missionaries; he watched the Jesuit and Loretto boarding schools grow and flourish. He was educated in the Jesuit school, St. Francis Institute.  He also saw a town that didn’t exist fourteen years before his arrival grow into a robust Catholic Community.   Then he saw the Jesuit and Loretto schools fail and our founding missionaries depart.

W.W. Graves grew up to be a businessman, Journalist, historian, writer and publisher.   The fact that he built a very modern publishing business, The Journal Press, supported his passion for history and writing. During his career he published countless books, pamphlets and pocket guides.  But the books he wrote about the earliest church history in Kansas propelled him to notoriety (copyright dates in parenthesis):
In addition to the above books Graves also:​
Recognition For a Life Lived Well:
On May 31, 1952 W.W. Graves’ life's work was recognized at a banquet held in the St. Francis School Gymnasium.  About 240 people attended including friends, farmers, businessmen, the President of the Kansas State Historical Society, college presidents, 3rd District Kansas Press Association executives, pressmen from across southeast Kansas, an Osage Indian Chief and a Catholic Bishop.  There are few people, in our area, who have received the level of honor that this group bestowed on Mr. Graves that evening.  But there are likely few Americans who have received the combined level of respect received from the Bishop and an Indian Nation that evening:Less than two months later, on July 22, 1952, William Whites Graves collapsed and died of a heart attack at home in St. Paul.   His obituary on the cover of the July 24, 1952 St. Paul Journal read:  “Death took this communities’ most esteemed and honored citizen Tuesday evening.”   Mr. Graves is also our most esteemed Knight [6]. 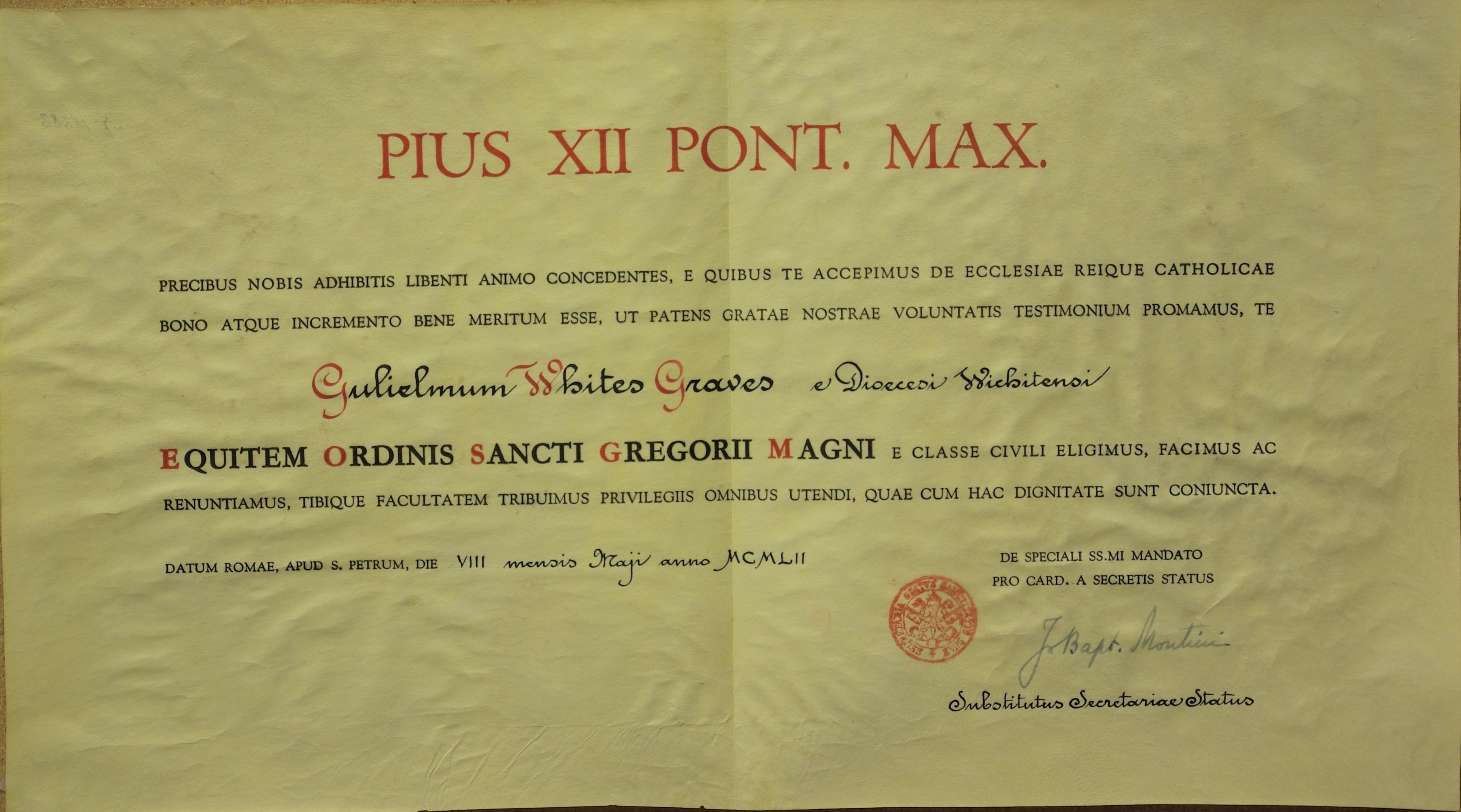 Scroll of a Vatican Knighthood of St. Gregory the Great Presented to William Whites Graves, by Bishop Mark K. Carroll on May 31, 1952. Bishop Carroll presented the Knighthood on behalf of Pope Pius XII [7].
Notes and References:
1. The Vatican is currently evaluating Father Michael J. McGivney for sainthood.

2. A LINK to the local field agent for The Knights of Columbus Insurance—John V. Schibi.

3. It is now known that in addition to the missionary work in Kansas, Oklahoma and Missouri, the Osage Mission Jesuit work also
extended into Arkansas and Colorado.

4. Graves was the long-time publisher of the St. Paul Journal.